I’m notoriously bad at keeping up with my social media. It isn’t that I don’t intend to, it is more of a matter of having the time. So, I am going to try and post a consistent blog about my luthiery work. Sometimes building, sometimes repairing, sometimes talking about my experiences as a musician. If there is ever something you want to ask me, I may answer it in this format as I enjoy telling stories. Here is the first one:

Look, I’m not the cleanest person. I’m basically the cleanliness equivalent of the tile floor in the menswear section of the Kmart on the bad side of town. So it isn’t like I have the room to be condescending to people regarding their guitar cleaning habits, but what is with all the finger cheese? You know, that black buildup on your fingerboard? Im not talking about a few little black areas and a little buildup; I’m talking about A LOT of buildup. It is skin cells, bacteria, and probably a lot of poop if we’re being honest. Its one thing if I find myself cleaning a fingerboard and theres some cheese here or there, but I have seen fingerboards that I have needed to scrape off to even find out what kind of wood it is. I had a customer drop a guitar off once for a restring. The finger cheese was so deep it was almost to the height of the fret. I went through probably a dozed razor blades, scraping space by space, and guess what? IT HAD INLAY. It didn’t look like it had inlay when it came in. To my surprise, hidden underneath enough DNA to mold into a fully grown, mature adult complete with hair and a disdain for life, was a really nice looking pearl inlay that went all the way down the fingerboard. HOW DOES THAT EVEN HAPPEN? I mean, that has to be years of buildup on a guitar played constantly by a person who sweats for a living and rolls in grease as a hobby, right? Like, you have to change strings at some point don’t you? How do you not just give it a little paper towel rub once a month? At some point you have to say to yourself “I used to have a guitar that had really nice inlay. Which one was it? Oh yeah! ITS THE ONE IM HOLDING RIGHT NOW!” It’s awful, and I see it a few times a year. Heres how to get rid of it on any raw wood fingerboard (NOT a finished fingerboard):

Very carefully, using a razor blade placed parallel to frets; drag the edge of the blade back and forth between the two frets. The most important thing is to ensure that you don’t roll the blade over the frets. Thats real bad. Also, don’t take off too much material. Oh, and be careful around inlay, some of them will look weird if you scrape them. Furthermore, be careful about the edges of the fingerboard, lest you add and unwanted angle or chip the finish. Additionally, pay attention to the edge of the blade and discard it for a different one if its develops a burr. You know what? Never mind. Just let me do it. Just promise me you will WASH YOUR HANDS BEFORE YOU PLAY!(which will also make your strings last longer) 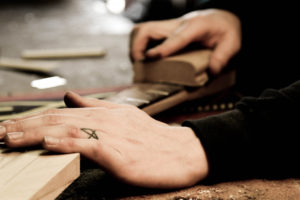