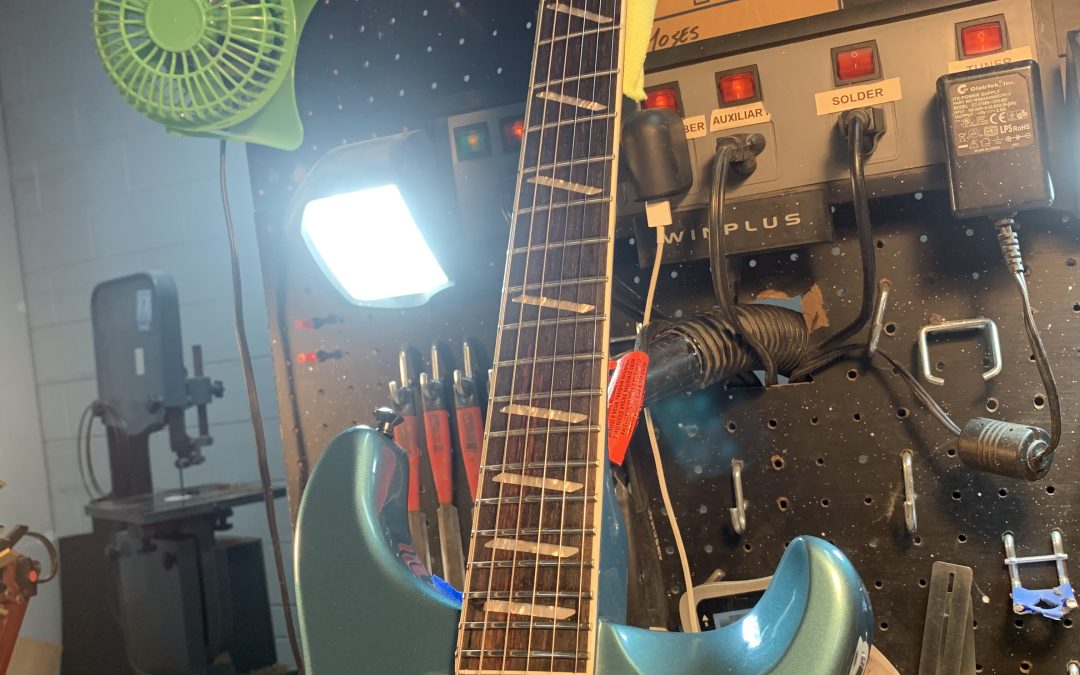 Over the years I have encountered the dreaded broken truss rod a few times. Typically with most manufacturers this means that you would need to remove the fingerboard to get at the truss rod. This is quite the process. Removing a fingerboard requires heating it up to loosen the glue. This can result in the pearloid inlays, and sometimes binding; shrinking, melting, and possibly needing to be replaced. There is also the danger of getting some tear out on the underside of the fingerboard, or on the fingerboard surface of the neck. Next, there is typically the need for some large degree of finish work to be done afterward. This can vary from simply blending the seam to respraying the whole neck. Occasionally the seam between the fingerboard and neck is below the line of the paint on the binding, and if that finish is metallic, it’s tricky to make look right without a respray. When gluing the fingerboard back on, the slightest inconsistency in clamping pressure can result in some really nasty humps in the neck, high frets, and ramps. So its not uncommon to do some fretwork after this. I was sick of it. There had to be a better way.

Then a 1972 Reissue Fender Jazz bass came across my bench. The truss rod was just spinning and had obviously broken off at the anchor. These have the adjustment screw at the end of the neck and the anchor at the first fret. They also have veneer fingerboards, rather than a slab fingerboard. This means that the radius of the fingerboard is sanded into the neck, and a thin piece of rosewood is glued on, making it match the radius. This was a cost cutting measure that Fender implemented in the early 60’s I believe. This means that removing the fingerboard is even more troublesome, and painstaking; and many people opt to replace the neck rather than replace the fingerboard. The customer was short on cash and didn’t like the high price tag for a fingerboard removal and replacement. Replacing the neck was out of the question as this was a custom shop reissue neck. Since he was short on cash, he offered a trade of a $600 set of Pfeil chisels; which was an agreeable trade.

I had heard of cutting out the first fretspace to get to the anchor, and decided this was a candidate for an experiment. I removed the first fret, and used an Xacto blade to cut through the fret slot down to the neck. I then traced the location that the A and D strings sat and cut down through the fingerboard there, and right at the fingerboard edge of the nut slot. Then I used a heat lamp, and an iron with a wet rag to loosen the glue just a little, and I popped that section right out. I exposed the anchor, which was toast, and pulled it right out. I cut a small piece of steel, cut new threads into it, cut extra threads into the truss rod, screwed that sucker together and glued the fingerboard section back on using a mix of aliphatic resin mixed with rosewood dust. It worked great. 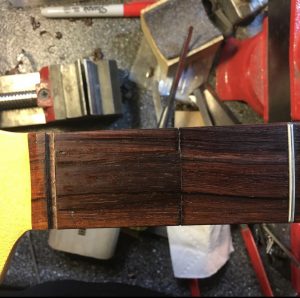 Here you can see the new piece of rosewood in its place. I used a soldering iron to simulate grain lines to make it less visible.

Recently, a PRS Santana SE came across my bench. Now, for those of you who don’t work on guitars but have decided to wade through this article because you’re a masochist or an insomniac: the PRS truss rod is awesome. It is the most sensitive dual action truss rod I have encountered. Some truss rods take a half turn to get where you want the neck; PRS truss rods usually only need 1/8th of a turn. They accomplish this using a single rod and two anchors. Each end of the truss rod is threaded in opposing directions, and the anchors are threaded in corresponding direction. This guitar has a metallic green finish, and as previously mentioned; the seam between the neck and the fingerboard sits lower than the seam of the metallic finish. I emailed PRS to ask where their anchors sit, as using a magnet to locate them yielded no results. They responded that I could not use the ol’ fingerboard section removal trick, but would have to remove the whole thing. I. DID. NOT. WANT. TO. HEAR. THAT. So I sat down with Ray, the head luthier at Guitar Czar where I work in Salt Lake City; and we discussed whether that was true. After a half hour of hypotheticals, I made the decision, or rather the gamble; that I was going to follow my gut and remove the two sections rather than the whole fingerboard.

I removed the nut, the first fret, and the last three frets. I cut through the fret slot with an xacto, and through the fret space with a Dremel wheel as the fingerboard was very thick. Using a chisel (one of those fancy Pfeil ones I was traded from the last one oft these jobs), I removed the section of fingerboard slightly wider than the D & G string spacing, from the nut to the first fret slot. Then I was able to get a look at the first anchor. It was working just fine, as I had suspected. 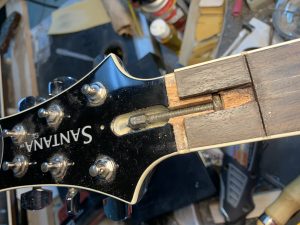 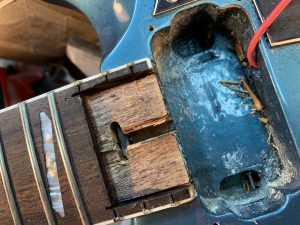 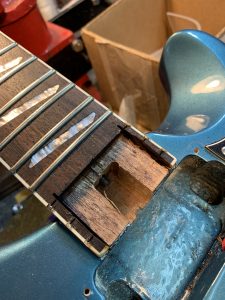 At this point I could see that the threads were stripped at this anchor. There were maybe one or two threads that were slightly intact, which is why when turning the rod you would occasionally feel it grab for a short moment. 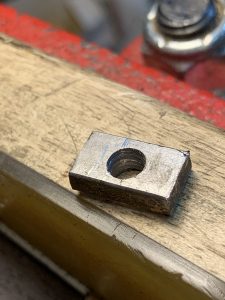 Not a lot of thread left in there.

I cut a new anchor and shaped it out of hardened steel, though I chose to use a slightly thicker piece to provide more strength. Threading the hardened steel was a whole bunch of fun. 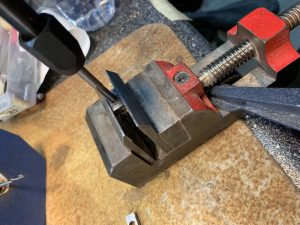 Because the rod is threaded in opposing directions, this meant that to thread the new anchor on I would need to get the rod in as far as it would go, then thread it out which would thread it in on the opposite end. 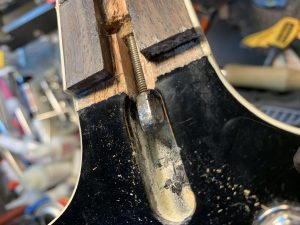 It worked like a dream. At this point I was walking around the shop high-fiving people (though I was making them sanitize their hands first. It is 2020 after all), ecstatic that my well informed “gamble” had paid off. 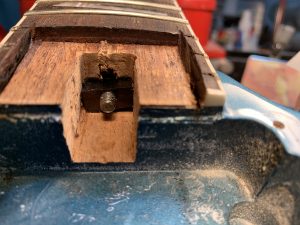 At this point I made a small piece of mahogany to glue back in to the end of the neck, that will hold the anchor in place and still allow the rod to move freely through it. 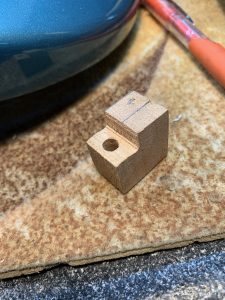 I glued it in, and glued the sections of fingerboard back on being careful to ensure they were EXACTLY where they needed to be. I filled the voids from the cuts using aliphatic resin and rosewood dust and allowed for there to be a recess rather than an excess. Then I filled the recess with rosewood dust and hit it with water thin super glue. After sanding it down, It was hard to see. A few little jabs with a sharp awl to simulate pores and it vanished. 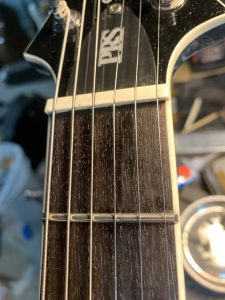 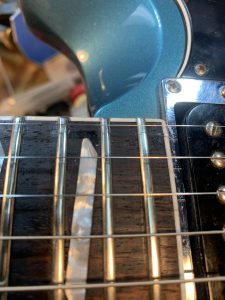 I strung it up, and made the first adjustment. It was at this point that I found the underlying issue. Frequently when you encounter a broken truss rod, you find that there is a problem with the neck that the customer had been trying to remedy with a truss rod adjustment. In this case, the guitar had a NASTY hump in in around the 5th fret. I did a little fret level, which i was sort of doing already to level the replacement frets at the end of the neck and the first fret. This got the guitar playing very well, though I highly recommend a re-fret. With a re-fret, this guitar will play better than it ever has. 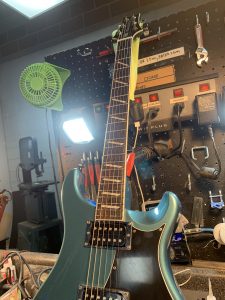 So thats it. What a pain in the ass, but so much easier than removing the whole fingerboard and all the headache that comes with it. Stay tuned for more in the future!